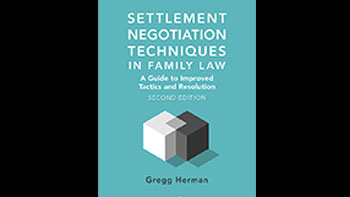 The ABA Family Law Section has just published a second edition of my book, “Settlement Negotiation Techniques in Family Law”.

Looking back: The best and worst of 2022

One of my favorite columns is to review family law cases and legislation from the prior year. It gives me yet another opportunity to express my thoughts on the good and the bad that occurred. Fortunately for me as a columnist, there was enough bad to make this column (hopefully) somewhat entertaining as “good” tends to be boring. So here goes:

Wisconsin Supreme Court election gets off to ugly start

One of the ugly parts of our legal system is the politics of electing judges. With an election for a Supreme Court justice in 2023, the ugliness has gotten an early start.

Few recent trials have attracted as much attention in the non-legal world than the Brooks trial in Waukesha.

Out of the mouths of babes

While a child of 16 years with a car is going to make his or her own decision about placement, do we really want to give a 7 year old that authority?

The right to self-represent

In 1975, The United States Supreme Court held that a criminal defendant has a constitutional right to waive counsel and self-represent in a criminal case. Faretta v. California, 422 U.S. 806 (1975). While the trial court has a responsibility to discourage self-representation, it cannot prohibit it. The result can be (and usually is) the circus occurring in the Waukesha trial of the Christmas parade driver Darrell Brooks.

A resource for family law cases

Without question, the biggest change in family law in my years of practice is the trend to settle cases rather than litigate. What was once routine has become rare.

Closing a law practice: Not as simple as it seems

After 38 years as a family law attorney with Loeb & Herman LLC, I have joined JAMS as a neutral in its Wisconsin office.

Batter up for some judicial activism

The term “judicial activism” is commonly thrown around to disparage judges. It generally is used to accuse courts of being too aggressive or too liberal. A recent court of appeals decision contains an element which raises an interesting question.

FINDING JURORS: We need a way to overcome common concerns about public service

Perhaps the most common question asked of me by friends, neighbors and family regarding the legal system is “How do I get out of jury service?”