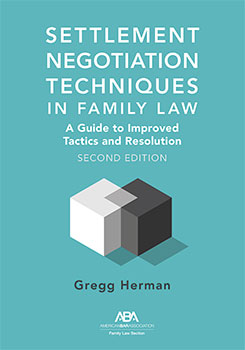 Receiving advance copies of a book from a publisher is about as close as I will ever come to giving birth!

There are certain similarities. There is (usually) a planning process, then a gestational period and finally a delivery. While the similarities may end there, it is still a great feeling.

The American Bar Association Family Law Section has just published a second edition of my book, “Settlement Negotiation Techniques in Family Law: A Guide to Improved Tactics and Resolution”. This book is designed to provide practical advice and information on successfully negotiating family law matters, including preparing a client for settlement negotiations, handling emotions, mediation, positional negotiations and much more.

The second edition adds chapters on settlement research, gender issues and domestic violence as well as an expanded look at the application of game theory principles to divorce negotiations.

There is a saying among divorce lawyers that “a bad settlement beats a good trial.” Well, if that is true (and it generally is true), then a good settlement trumps everything.

Yet many lawyers seem to think that negotiating a settlement is intuitive and does not require any special skills or training. While to some extent that is true, there is a huge amount of education available to improve a lawyer’s skills. Especially when there are children involved (including adult children), the effect of the divorce process can effect the parties for years to come.

My book is written with the hope of helping lawyers improve their services to their clients. It was hugely satisfying to being asked to write a second edition as it means that the first edition must have found enough sales and positive reviews to warrant it. I hope that in at least some small way, it helps mitigate the negative effect of the divorce process, especially for the children involved.