The Role of a Family Law Attorney in Settlement Negotiations 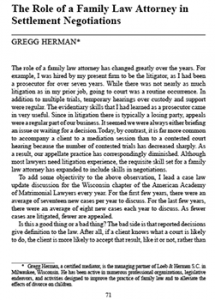 The role of a family law attorney has changed greatly over the years. For example, I was hired by my present firm to be the litigator, as I had been a prosecutor for over seven years. While there was not nearly as much litigation as in my prior job, going to court was a routine occurrence. In addition to multiple trials, temporary hearings over custody and support were regular. The evidentiary skills that I had learned as a prosecutor came in very useful. Since in litigation there is typically a losing party, appeals were a regular part of our business. It seemed we were always either briefing an issue or waiting for a decision. Today, by contrast, it is far more common to accompany a client to a mediation session than to a contested court hearing because the number of contested trials has decreased sharply. As a result, our appellate practice has correspondingly diminished. Although most lawyers need litigation experience, the requisite skill set for a family law attorney has expanded to include skills in negotiations.