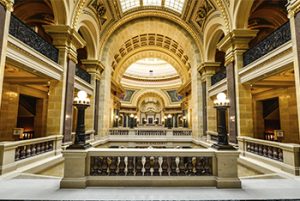 It has been eight years since the Wisconsin Supreme Court accepted a review of a family-law case, other than regarding grandparent visitation.

So, though it was surprising that they granted review of a case with a perfectly fine court of appeals decision, one at least hoped that they would find some way to use the occasion to make a decision which makes a difference in this area of law. Instead, their decision in Pulkkila v. Pulkkila, 2020 WI 34, 386 Wis.2d 352, 927 N.W. 2d 164 makes one wonder why they spent their time.

In Pulkkila, the court ordered, by agreement of the parties, that the parties maintain life insurance with their children as “sole and irrevocable primary beneficiaries until the youngest minor child reaches the age of majority.” The husband’s policy had a death benefit of $250,000. The remedy for non-compliance in the settlement agreement was “a valid and provable lien against his or her estate.”

After the divorce, James (the husband in the divorce) changed the beneficiary designation on a life-insurance policy to his new wife, contrary to the court order. James died when his children were still minors and should have been beneficiaries. Their mother, Joan, filed a motion to enforce the insurance provision of the judgment of divorce using a constructive trust since James’s estate only totaled $5,600 at the time of the hearing, thereby making a lien against the estate meaningless. The circuit court denied Joan’s motion, reasoning that in order to “get to” the question of a constructive trust, it had to find that the language of the MSA was ambiguous. The court acknowledged that it was a “rotten deal” for the children, but the sole remedy was a lien against the estate.

Joan appealed and the court of appeals, sensibly, reversed holding that “the equities of this case mandate the creation of a constructive trust in favor of the children so as to accomplish the intent of the MSA…(W)e also conclude that the remedy provided in the MSA (a lien against the estate) is equally unjust and not a viable remedy as James failed to fund his estate in an amount sufficient to provide the equivalent support for his children.” For some reason, the Supreme Court justices decided that this was a good case for them to reconsider.

The eventual Supreme Court decision was, at best, strange. At worst, it was a total waste of time and paper. The majority agreed that the lien was not an exclusive remedy. However, they decided that while a constructive trust might very well be an appropriate remedy, the trial court needed to make additional findings, so they remanded the case back to the trial court for such a hearing.

It is totally unclear what additional findings are necessary. The following facts were undisputed:

What additional findings should be necessary? The only issue in the case is whether the lien is – or is not – an exclusive remedy. The majority (consisting of four justices – two justices recused themselves) held that it is not.

Even stranger was the dissent by Justice Rebecca Bradley. Justice Bradley spent (wasted?) 28 pages to prove that a Marital Settlement Agreement was a contract. It is not clear why she felt it necessary to do so as (a) no one seemed to believe otherwise and (b) it wasn’t the issue in the case in any event. From there, she concludes that the lien was, indeed, the exclusive remedy, despite the fact that the MSA, which she so firmly believes created a contract which the court cannot change, does not so provide.

Changing beneficiaries in life insurance contrary to a court order – or failing to maintain such insurance at all – is not uncommon. In addition, it is not infrequent that parties to a divorce seem to misinterpret a court order as a court “invitation”, perhaps thinking that they can RSVP if they intend to comply. Therefore, in my column on when the Supreme Court granted review, I suggested that the court might want to use the opportunity to make it clear that compliance with a court order should not be an option – it should be mandatory. And if someone chooses not to comply, there should be consequences. I wrote: Perhaps the court wishes to differentiate between an order and an invitation. If so, this would be as good as any case to do so. See: Gregg Herman, “It’s An Order, Not An Invitation” Wisconsin Law Journal, August, 2019.

One of the realities of real-life practice in this area of law (of which, the Supreme Court may not be aware) is that some very nice, normally honest people seem to think that having a hated ex (or soon-to-be ex) spouse as an adversary creates an exception to laws and ethics. As divorce lawyers, we seem to spend a fair amount of time trying to convince our clients otherwise. There is a saying that “criminal courts deal with bad people at their best and family courts deal with good people at their worst”. This was a chance for the Supreme Court to give lawyers some assistance by showing some outrage at a blatant violation of a clear order.

Unfortunately, the Supreme Court chose not to do so. Whereas they held that a lien is not an exclusive remedy and that a constructive trust might be an available remedy, it would have been helpful if the court had made it clear that court orders have meanings and there will be consequences for failing to comply. But helpful and real life don’t always coincide.