Proud of our courts

After many years of writing articles on Family Law for the Wisconsin Law Journal, I’ve been asked to expand my repertoire to include other areas of law on occasion. So, while I will continue to write on family law issues, as someone who has opinions on just about everything, this was a request which I was delighted to accept. My intent will be to discuss interesting and sometimes controversial topics. So if you disagree, let me know! And I welcome any ideas for a potential column. 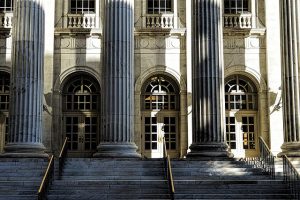 Although most of my columns on family law criticize courts (it’s more entertaining than praising them), I am going to start my new project by praising our legal system. Although, for the most part, during the interim between the election and inauguration most politicians have looked disingenuous (and that’s a mild term), the courts almost uniformly have not.

There is, of course, nothing new about disingenuous politicians. Most politicians speak, act and vote consistent with their own political interest rather than what’s best for the country. The exercise of political courage is rare and far between. The Pulitzer Prize winning book, Profiles in Courage, supposedly written in 1956 by then Senator John F. Kennedy, only found eight acts of bravery and integrity by United States Senators in the history of the country. There have been, in my opinion, few if any since. Oh, by the way, the reason I say “supposedly” written by JFK is that it is generally accepted that the book was actually ghost written by Ted Sorensen. In other words, the very book about political courage is a phony.

On the other hand, there have been far more than eight instances of judicial court courage in the history of this country. In the past two months, according the Washington Post:

“In a remarkable show of near-unanimity across the nation’s judiciary, at least 86 judges — ranging from jurists serving at the lowest levels of state court systems to members of the United States Supreme Court — rejected at least one post-election lawsuit filed by Trump or his supporters.” A number of these judges were appointed by President Trump. Per one such judge, the Hon. James E. Boasberg of the United States District Court for the District of Columbia: “Courts are not instruments through which parties engage in such gamesmanship or symbolic political gestures.”

Courts are, of course, not perfect and have made poor decisions in the past (see Plessy v. Ferguson, for example). In fact, in the Wisconsin Supreme Court version of the election dispute, Trump v. Biden, 2020AP2038, three justices apparently were willing to throw democracy to winds and disregard the preference of the clear majority of voters. Fortunately, for democracy it takes four justices to make a majority on that court.

There is a story about John Roberts: When he was a practicing lawyer, he lost a case before the U.S. Supreme Court by a vote of nine to nothing. When he told this to his client, he was asked: “How could we lose nine to nothing?” Roberts’ reply: “Because there are only nine justices on the Supreme Court.” Similarly, if Trump’s claim had come before more judges, it would have been rejected by the same number.

Our legal system is premised on rules of evidence. Going to court and claiming fraud, absent admissible evidence, should get a lawyer nowhere. SCR 20:3.1 (which is based on the ABA Model Rules) prohibits lawyers from knowingly advancing a meritless claim. While all practicing lawyers can recite instances where this rule was ignored without repercussion, it is nice that when it counted, for the most part (here, I exempt three Wisconsin Supreme Court Justices), our legal system did the right thing. As lawyers, we can be proud of it.