No Tax Deductions for Maintenance 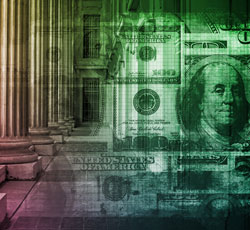 Effective Jan. 1, 2019, maintenance will no longer be deductible for divorces granted after that date. The effect will be less money for both parties because income will be able to be shifted from a payor at higher tax rate to a payee at a lower one.

There is precedent for Congress amending the tax code in a manner that harms divorcing couples. In the Divorce Tax Reform Act of 1986, Congress changed the terms of the deductibility of family support such that family support is rarely, if ever, used anymore. Family support accomplished two things:

First, it was more realistic. When a recipient of both child support and maintenance goes to the grocery store, that person doesn’t buy food for himself separately from food for the children. Similarly, when a recipient of support pays for shelter, there was no differentiation between the portion of the rent or mortgage for the children and for the parent. Thus, family support, which combines child support and maintenance, made a great deal of sense.

Second, family support allowed the shift of income from a higher tax rate to a lower one, which encouraged payors to produce more income and thereby pay more support. There was a price paid by the U.S. and state treasuries, but the benefit to children of having increased support outweighed the minimal additional cost. Family support was not eliminated, but it was made so difficult that most lawyers are reluctant to utilize it. The net effect is that payments usually differentiate between child support and maintenance, frequently resulting in a worse result for both parties.

Similarly, after Jan. 1, 2019, the pain will be equalized between the parties (the court is required to take tax consequences into account when making support orders). Recently, I tested a scenario where a payor earns $300,000 a year, and the payee earns $50,000 a year. To equalize income without deductibility resulted in both parties having approximately $500 per month less, after tax, as net disposable income. In other words, the parties would have $1,000 a month less to spend, with the U.S. and state treasuries benefitting as a result.

Why did Congress make these changes? Well, there is a common agreement that the new tax law will substantially add to the deficit, by some estimates to the tune of $1 trillion dollars or more. Congress needed to find someplace to minimize this increase to the deficit.

As with the Divorce Reform Act, where there was no one lobbying for the children, divorcing couples do not have an effective lobbying organization to assert their cause. The American Academy of Matrimonial Lawyers (AAML) strongly opposed the measure, but it was unable to sway decision-makers

There is one year for Congress to change this law. Absent a groundswell of politically connected organizations, lobbyists, and of course, money, there is no reason for Congress to correct this. The net effect will harm both parties going through a divorce.