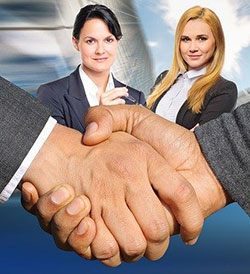 In the movie “A Marriage Story,” a female lawyer (played by Laura Dern, who won the Academy Award for Best Supporting Actress) is incredibly compassionate toward her client, saying she will move forward with the divorce, “as gently as possible.”

In the end, despite the fact that the male attorney was clearly the most aggressive and assertive, the female attorney was able to reach an agreement that was more favorable and acceptable to her client. Clearly, being aggressive isn’t the only way to be a successful negotiator.

However, in reality being a successful negotiator has little to do with a negotiator’s sex but is instead related to the different abilities possessed by each individual. So, although there is no difference in effectiveness and success between men and women, there is often a difference in how men and women reach that success and effectiveness. Although assertiveness is a fundamental for negotiators, there are four other fundamentals that can also make lawyers successful in negotiations. Those are empathy, ethicality, flexibility, and social intuition.

Empathy is an individual’s ability to understand the emotions and viewpoint of a counterpart even if there is a disagreement. Generally, research shows that women tend to possess this skill more often than men. Empathy is often demonstrated by active listening and respectful questions.

Next, the ethicality of negotiators relates to their reputations, which can be used to predict how they will behave and their trustworthiness. Women are presumed to be more ethical and trustworthy and have higher moral character and ethical standards. However, women are more likely to be lied to in negotiations.

Also essential for negotiators is flexibility in relation to outcomes and processes. Process flexibility is the ability to shift styles or approaches when needed.

Outcome flexibility is the ability to try different methods and find integrative solutions. Typically, research shows that women take longer to make decisions, which allows them to think differently and establish more of a plan. They are also more likely to get more opinions from others before deciding.

The next important skill for negotiators is social intuition, which is essentially the ability to be self-aware while also being able to read a counterpart and then using cues to smooth over social interactions during negotiations. Women tend to be better at this than men because women commonly are better able to decode body language, tone, facial expression, emotions and similar things, allowing them to be able to better manage the mood and tone of interactions since they are able to read what is going on with their counterpart. This can be done through touch and compliments, which are more socially acceptable for women to engage in than their male counterparts.

Lastly, the skill that most people associate with being the most important in negotiation is assertiveness. Assertiveness is more than simply being aggressive. It includes the ability to prepare the substance of negotiations and then use that information to make strong and persuasive arguments. This is a skill most commonly possessed by men, which has been explained by the fact that men tend to be more confident. However, there have been findings that women can be as assertive as men.

Both men and women can be effective negotiators. There are, however, instances in which difference between the two seem to play a role in negotiating. This is not to say that one is better or worse at negotiating that the other. Rather, women possess some abilities that help them be successful negotiators and men possess others. Each has ways to be successful in negotiations. Although one has to be careful not to stereotype a negotiator, it is interesting and useful to be aware of the differences between men and women.