A Marriage Story: Is It Close To Real Life? 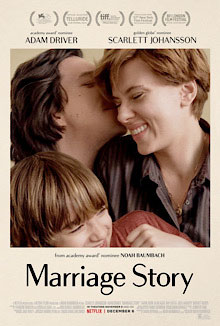 Although I consider myself a movie buff, I typically dislike movies about lawyers and the legal system. For example, although Paul Newman (a great actor) was nominated for the Academy Award for playing a lawyer in “The Verdict”, I found the movie irritating (at best). Apparently, the rules against ex parte contact with the court were unknown to the script writers.

Therefore, I was pleasantly surprised with Noah Baumbach’s new film “A Marriage Story”. (A previous film by Baumbach about divorce, “The Squid and the Whale” is also outstanding). Not only is most of the film very realistic, it’s also about not just the parties in a divorce but also the lawyers.

The film’s opening scene, by itself, warrants discussion. The parties in a pending divorce are meeting with a mediator and (no spoiler alert needed here since, if the mediation had succeeded, the movie would last 10 minutes) it didn’t go well. So instead of a quick and relatively easy resolution by the parties with the assistance of a mediator, the parties lawyer up.

Why didn’t the mediation succeed? Perhaps it came too early in the process. Much as it is nice to think that substantial resources (both emotional and financial) could be saved if parties would go to mediation first, such a step doesn’t always work in real life. Frequently, and unfortunately, settlement does not occur until parties have exhausted their financial and emotion resources. In mediation, like many other things in life, timing is everything.

In the movie, the next step is to “lawyer up”. The wife does so first, hiring a woman played by Laura Dern. At once charming, supportive and aggressive, she calls the husband, a step that results in his hiring an attorney. His first lawyer is played by Alan Alda, who is clearly not tough enough to take on the wife’s lawyer. So, he next hires one played by Ray Liotta. The resulting court hearing bears great similarity to family-court commissioner hearings in Wisconsin. These hearings, as in the film, are free of evidentiary rules – and most other rules of civility and professionalism. As one family court judge used to put it: The only laws which apply in those hearings are the laws of the jungle.

Besides providing good cinema, the scene reflects the harm to the parties’ future relationship that can be caused at such hearings. Things said cannot be unsaid. Although the lawyers go on to their next case, the parties must live not only with the results but also with the effects of the process. As Shakespeare said: “The evil that men do lives after them”.

To be sure, lawyers generally provide great assistance by convincing clients to make rational decisions rather than act on pure emotion. But many people do not think this is true. The results can be seen in the substantial number of cases in which both parties are pro se. If a case is relatively simple, this is not necessarily a bad thing. In many other cases, lawyers can help not only by identifying possible issues but also by helping to find a resolution.

Although the ending of the movie (no spoilers here!) was not as good as the rest of the film (in my never-humble opinion), there is a message: One needs to be careful of the course chosen. It does make a difference.