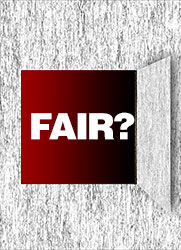 Recently, a default divorce hearing fell through because the judge in the case had the temerity to ask a party whether she thought the proposed settlement was fair.

Incredibly, the wife answered honestly (an all too rare occurrence in our court system) that there was nothing fair about it. As a result, the judge declined to accept the settlement (a couple of months later, the judge did accept it after seeing the wife change her testimony.)

It’s not uncommon for a judge or lawyers to ask the parties at a default hearing if they believe a settlement is fair. It’s also not unusual for the parties to lie because they want to get on with their lives.

Not that there is anything wrong with that word. In most contexts, it’s perfectly acceptable. However, in a divorce context, in which all of the parties believe they are 100% right, it tends to frustrate people.

Before 1978, the resultant property division and support orders in a Wisconsin divorce included the idea of fault. For whatever reason (my hypothesis is that fault was too difficult to figure out in most cases,) Wisconsin went the route of most states and eliminated fault as a factor. Although this may have had many salutary results, it can also be a source of frustration to parties who feel a divorce is strictly (or mostly) the fault of the other side. Yet the legal system does not punish wrongdoers or compensate the innocent.

For example: One of the most difficult questions that I get asked goes along the following lines: “Let me understand this. I did not do anything wrong in this marriage – I didn’t cheat, abuse or even neglect my spouse. Yet because he (or she) wants out, I am going to lose half of my assets, maybe half of my income and half of the time with my kids. And, I will have to pay you. Why is that fair if I did nothing wrong?”

The answer, of course, is that because of the “no fault” law in Wisconsin (and most other states) “fair” has nothing to do with it. Asking the question is similar to asking a doctor why you have a certain disease when you have exercised, eaten appropriately and lived a generally healthy life. You just do. So let’s figure out a treatment plan.

At root, the trouble is that there a great amount of subjectivity in any interpretation of the word “fairness. “ What is perceived as “fair” to one may be perceived as totally unfair to another. Perhaps in the next world there is a far greater judge than we have here (no offense to any judge who might be reading this) who can give “fair” an objective application. But this rarely happens on this Earth.

So, relying on the term usually does little more than leave behind two very frustrated parties. That’s why I never ask my clients if an agreement is “fair” – rather, I ask if they believe it to be reasonable and in their best interests. Fairness be damned. At least in this world.