Who Wants to Be Friends – with a Judge? 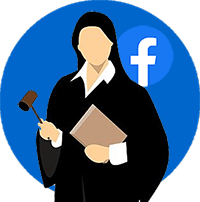 On Jan. 13, 2020, the Wisconsin Supreme Court will hear oral arguments on the question of who can be friends with a judge – at least in the cyber world.  The implications of the case may affect the use of ESM (Electronic Social Media) by judges and bring into play the adage “bad facts make bad law”.

In Miller v. Carroll, 2019 WI App 10, 386 Wis. 2d 267, 925 N.W. 2d 580, the Wisconsin Court of Appeals reversed and remanded a custody case due to the appearance of impropriety by the trial judge who accepted a “friend” request on his Facebook page from a litigant while a custody case was under consideration. Although the appellate court was careful to note (several times) it was not making any “black letter” rules, the Supreme Court has accepted review and black letter rules are one possible outcome.

In the Miller case, Angela sought sole custody of the parties’ child on the basis of domestic abusive towards her by the father, Timothy. The trial was held on June 7 and 8, 2017 and written arguments were submitted on June 16, 2017.  On July 14, 2017, the court issued a written decision, siding with Angela. However, on June 19, 2017, while the matter was under advisement and unknown to Timothy, the judge had accepted a Facebook friend request from Angela.  From that date until the written decision came down, Angela “liked” 18 of the judge’s posts and commented on two of them. None of these “likes” or comments related to the pending issue. However, during that time period, Angela “liked” multiple third party posts and shared a third-party photograph relating to domestic violence. There is no proof that the judge ever saw these “likes” or the shared photograph.

Timothy learned of these transactions only after the written decision and he moved for reconsideration and a trial before a different judge. The Facebook judge denied the motion, telling Timothy that he was not influenced by the Facebook interaction as he already had his mind made up after hearing the evidence.

The court of appeals reversed. The appellate court held that by becoming “friends”, a reasonable person could question a judge’s impartiality. In addition, the risk of actual bias and appearance of partiality is heightened because Timothy did not know about the connection. Finally, the interaction raises concerns about ex parte communication. The court held that the presumption of judicial impartiality had been rebutted and a due process violation occurred. The court was careful to say that while it was not establishing a bright line rule regarding judicial use of ESM: “[w]e caution that judges should recognize that online interaction, like real-world interaction, must be treated with a degree of care”.  (At 386 Wis.2d 283.)

The worrisome aspect is that the Wisconsin Supreme Court accepted review of a well- reasoned, thoughtful and limited court of appeals case (they only accept an estimated 10% or less of petitions for review). It’s worrisome because the facts of this case are unusual (how often does a judge accept a FB friend during the time period where a decision is pending on the friend’s case?). Yet, there are a lot of issues associated with ESM and too broad a holding could create more problems than it solves by reversing one unusual case.

For one example, there are many more forms of ESM than FB (e.g., Linkedin, Pinterest, Twitter, Instagram, YouTube, Snapchat, Redditt and undoubtably a number I’ve never heard of). They each work differently, so a blanket rule which attempts to work for all forms may very well be akin to trying to fit a lot of square pegs into round holes. Since judges have to run for election is many states (including Wisconsin), outlawing use of ESM by judges might work a serious political handicap.  And, in any event, policing all of the different forms of ESM may be an impossible task.

Besides, the rule prohibiting ex parte contact as it currently exists seems to work perfectly well:  Simply put, judges should not be communicating on substantive issues with only one side of a contested dispute.  Extending “communicating” to include ESM should be no more difficult than it must have been when the telephone was invented – or email, for that matter.  While such a general rule may not be perfect, defining improper ex parte communication in the modern world, to stay relevant, may have to rely on the famous quote from Justice Potter Stewart (in quite a different context): “I know it when I see it.”

The Wisconsin chapter of the American Academy of Matrimonial Lawyers has filed an amicus brief in the case (authored by Milwaukee attorney Jennifer Van Kirk) which discusses all the various aspects of ESM.  The brief concludes:

AAML requests that this case be decided narrowly, and the holding limited to the unique facts of this case. Given the depth and breadth of the research required to fully address the use of ESM by judges, AAML respectfully asks that a Committee be created to study the matter and make recommendations for rules governing ESM for judicial officers.

The Supreme Court should accept this recommendation and not create any blanket rules in a complex area based on the particularities on one case.